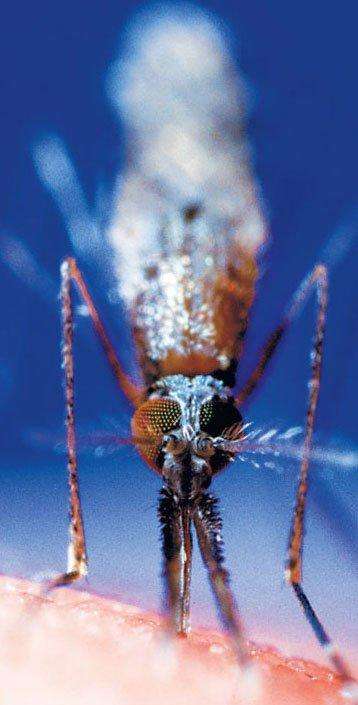 Scientists have figured out a way to block the spread of malaria using genetically-modified (GM) mosquitoes that carry synthetic genes to curb the transmission of the blood parasite when the insect bites its human host.

The development is seen as a potential breakthrough in preventing the spread of one of the world’s most dangerous diseases. Malaria kills up to a million people a year, mostly children living in Africa where the disease is endemic, and strikes down a further 500 million victims who fall seriously ill.

A decade ago, scientists created the first GM mosquitoes but their potential use in stemming the transmission of malaria has been stymied by the theoretical inability of the engineered insects to out-compete the non-GM mosquitoes living in the wild that actually harbour the blood parasite.

However, a new study has shown that it is possible for GM mosquitoes to rapidly pass on malaria-blocking genes to wild mosquitoes with the help of a second gene that spreads the GM trait within the sperm-producing cells of male mosquitoes.

The plan is to physically attach the synthetic gene, called the homing endonuclease gene, to an anti-malaria gene and insert the entire genetic construct into male GM mosquitoes released into the wild. The endonuclease gene should then ensure that nearly all the sperm cells produced by these GM males will carry the anti-malaria trait into the next generation of mosquitoes.

Without the endonuclease gene, only half of the GM male’s sperm will carry the malaria-blocking gene, as expected from the normal 50:50 ratio rule of classical Mendelian inheritance. This severely limits the ability of GM mosquitoes to outbreed and outnumber their wild cousins, whereas the endonuclease gene causes the trait to spread rapidly through the wild population of mosquitoes.

Professor Andrea Crisanti of Imperial College London said that laboratory experiments have now shown that the endonuclease gene is very effective at spreading a GM trait through a caged population of the mosquito Anopheles gambiae, one of the main malaria-transmitting species in Africa.

After introducing a few GM males into the laboratory population of mosquitoes, the GM trait increased to cover about 50 per cent of the captive mosquitoes within 12 generations of the first introduction – a period of just a few months.

“This is an exciting technological development, one which I hope will pave the way for solutions to many global health problems. It demonstrates significant potential to control these disease-carrying mosquitoes,” Professor Crisanti said.

One of the advantages of using the endonuclease gene is that it can be made to be highly specific for a particular species of mosquito. An endonuclease gene designed to work in the chromosomes of A. gambiae should not affect the many other kinds of mosquito that do not carry or transmit the malaria parasite, said Professor Austin Burt of Imperial College.

“Malaria is still a terrible disease. There are around 3,500 species of mosquito in the world, but only a few of them transmit the deadly malaria parasite, plasmodium falciparum. This technology allows us to focus exclusively on controlling these most dangerous species,” Professor Burt said.

Nikolai Windbichler, the lead author of the study published in the journal Nature, added: “In our mosquitoes the homing endonuclease gene is only passed on, through reproduction, directly to the carrier’s offspring. This makes for a uniquely safe biological control measure that will not affect even very closely related mosquito species.”

There are no immediate plans to conduct outdoor field trials in Africa with the GM mosquitoes until experiments at a large mosquito laboratory being built in Italy are carried out in the next couple of years. One of the first tasks of the scientists is to identify which of about 15 anti-malaria genes they will pick as the trait to be used in GM mosquitoes.

“The question of releasing GM mosquitoes into the environment concerns us a lot which is why we need to carry out much more research before field trials in Africa are considered in three to four years,” Professor Crisanti said.

Several genetic traits have already been identified which can limit the mosquito’s ability to transmit malaria. In 2002, scientists found a gene that prevents the parasite from moving from the insect’s gut to its salivary glands.

A separate area of research is investigating the possibility of releasing GM sterile male mosquitoes as a way of controlling dengue disease, which is also transmitted in a mosquito bite.

500 million new cases of malaria are reported worldwide each year.

1 million deaths are caused by malaria each year, the majority in Africa.

57 countries are registered as ‘malaria-endemic’, with the disease posing a threat to human life.

2 million cases of malaria were reported in Pakistan after last October’s floods.

1.3 per cent rate at which malariacan decrease gross domestic product in countries with high disease rates.

765 million people in sub-Saharan Africa are said to be at risk from malaria, according to the World Health Organisation.