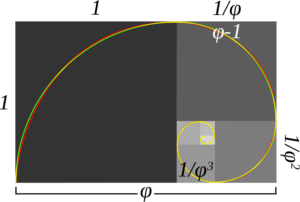 Like every sequence defined by linear recurrence, the Fibonacci numbers have a closed-form solution. It has become known as Binet‘s formula, even though it was already known by Abraham de Moivre:[11]

follows from the defining equation above.

which is also known as the generating polynomial of the recursion.

Any root of the equation above satisfies

is a root of the equation, and the other root is

are geometric series (for n = 1, 2, 3, …) that satisfy the Fibonacci recursion. The first series grows exponentially; the second exponentially tends to zero, with alternating signs. Because the Fibonacci recursion is linear, any linear combination of these two series will also satisfy the recursion. These linear combinations form a two-dimensional linear vector space; the original Fibonacci sequence can be found in this space.

, with coefficients a and b, can be defined by

, resulting in the formula of Binet we started with. It has been shown that this formula satisfies the Fibonacci recursion. Furthermore, an explicit check can be made:

establishing the base cases of the induction, proving that

Therefore, for any two starting values, a combination a,b can be found such that the function

is the exact closed formula for the series.

, the number F(n) is the closest integer to

Therefore it can be found by rounding, or in terms of the floor function:

Similarly, if you already know that the number F is a Fibonacci number, you can determine its index within the sequence by

where the constant depends on starting values – as the remaining term in the exact formula for the Fibonacci numbers becomes exponentially close to zero as n grows. Taking the ratio yields

More formally, it must always follow from the explicit formula that for any real

[edit]Decomposition of powers of the golden ratio

Since the golden ratio satisfies the equation

this expression can be used to decompose higher powers

as a linear function of lower powers, which in turn can be decomposed all the way down to a linear combination of

and 1. The resulting recurrence relationships yield Fibonacci numbers as the linear coefficients:

This expression is also true for

if the Fibonacci sequence

is extended to negative integers using the Fibonacci rule

The eigenvalues of the matrix A are

, and the elements of the eigenvectors of A,

, are in the ratios

Using these facts, and the properties of eigenvalues, we can derive a direct formula for the nth element in the fibonacci series:

This matrix has a determinant of −1, and thus it is a 2×2 unimodular matrix. This property can be understood in terms of the continued fraction representation for the golden ratio:

, and the matrix formed from successive convergents of any continued fraction has a determinant of +1 or −1.

The matrix representation gives the following closed expression for the Fibonacci numbers:

Additionally, since AnAm = Am + n for any square matrix A, the following identities can be derived:

For another way to derive the F2n + k formulas see the “EWD note” by Dijkstra.[13]